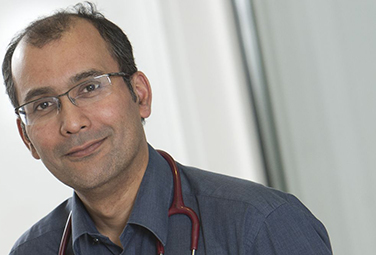 Professor Anisur Rahman graduated from Oxford University in 1988 and trained in rheumatology in London. In 1998, he received a PhD from the University of London (molecular properties of autoantibodies that cause tissue damage in lupus and the antiphospholipid syndrome, APS); he was appointed Senior Lecturer at University College London shortly thereafter and began to build up his own research group. He was promoted to a personal chair in rheumatology in 2008.

While continuing basic science research, Anisur has developed clinical research programs in autoimmune rheumatic diseases and chronic pain. As a member of the British Isles Lupus Assessment Group and of SLICC, he has been part of large multicenter lupus research projects. In parallel, his basic science group is developing a potential new therapeutic agent for APS.

Professor Rahman has forged a successful collaboration with researchers in primary care; together they are working on studies of beliefs and expectations about chronic pain and have also carried out NIHR-funded research into development of a self-management programs for people with chronic pain in the community. He has published extensively having over 130 publications in lupus; he has contributed to several book chapters in the Oxfords textbooks of Medicine and Rheumatology. He was awarded the Michael Mason Prize for his research by the British Society of Rheumatology in 2004. In his spare time Anisur enjoys writing poetry and essays, listening to classic music and learning foreign languages.